A preliminary agreement to build a factory that will produce bean-to-bar chocolate, chocolate masses and roasting coffee in the agro-industrial park “K-Argo” has been reached. It’s projected that the investment volume will be more than 100 million roubles and the planned number of new jobs will be about 100. As the company believes the import substitution is a part of the strategy for the future company. The factory will produce chocolate masses and chocolate products which are the same in quality as imported analogues, so it will allow customers to enjoy high-quality domestic product at a competitive price.

LLC “Agroimpex-Trade” specializes in supplying cocoa beans, cocoa products, green coffee, nuts and dried fruits for the food industry to Russia, Kazakhstan, Georgia and Belarus for more than 10 years. On average, every year the company supplies over 5000 tons of products from more than 50 countries. A large selection of goods consists of more than 60 items.

In December 2015 the company became international by opening its logistics cluster in Estonia. The geographical choice of opening a subsidiary company is not accidental because there is the first continental port in Tallinn where raw materials come from overseas.

“This agreement is a very important step in realization the strategy of “Agroimpex-Trade” towards increasing the presence of small and medium-sized industrial enterprises in the markets in Russian regions.  We are interested in attracting small factories, private coffee chefs, confectionery crafts, coffee shops and restaurants. The construction of the factory will be the impetus for the development of the industry in the region”, commented Marina Golovanova.

Here you can find more information about the agro-industrial park “K-Agro” http://k-agro.com/ru

The area of the agro-industrial park “K-Agro” is more than 2500 hectares.

The current residents are the center of development and adoption of processing technologies by the accelerated electrons which is called LLC “Tekleor” and the company “Mikaello” producing sweets based on fruits and nuts in chocolate glaze. 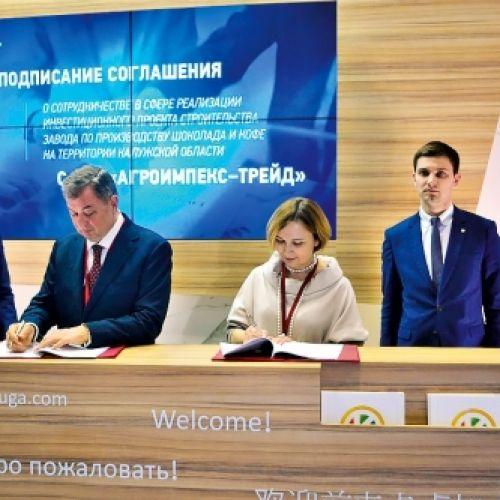