The agreement concluded with Alt-Profi Plus provides for construction of a factory to produce clothing for children and teenagers of Russian-made natural and wear-proof fabrics. The scope of investments is to reach RUR188 million.

Alt-Profi Plus factory is to produce children clothing of wool and cotton cloth, knitwear and denim for preschoolers, children and teenagers. The company’s primary markets are Russia and the CIS countries.

The agreement with Spetssplav provides for commissioning of a plant for light alloys’ casting. The company is to invest RUR3.3 million in the project, 25 new jobs are to be created. The company’s products are to be supplied to casing plants. The facility is to reach its design capacity by Q4 2019.

In the future Spetssplav plans to manufacture new products being in demand in various industries, namely engineering, construction, oil and gas production, railways.

The establishment of priority social and economic development areas promotes the development of small and medium businesses, donates to creation of new jobs, and makes the life of local residents more comfortable. PSEDA’s residents enjoy special tax benefits and administrative preferences. Companies planning to invest RUR 2.5 million and more are eligible to get a status of Kaluga Region PSEDA resident. 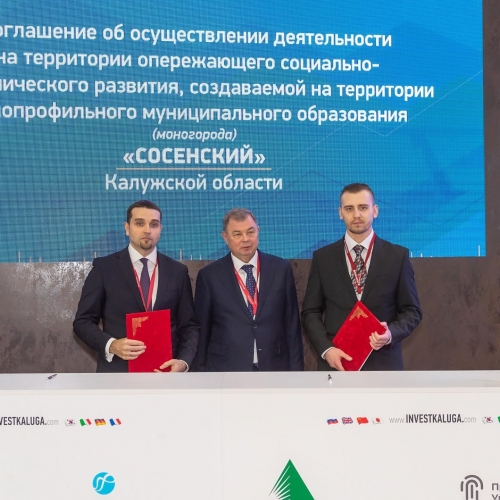