Delegation of German companies Baden-Wurttemberg federal land visited Kaluga Region with business mission on August 29. The delegation is headed by Peter Schlosser, Head of CIS Department, Economic and Scientific Cooperation Society, Baden-Wurttemberg federal land. Also, representatives of Chambers of Commerce and Industry and Associations for foreign trade promotion are members of the delegation.

Round table Opportunities for German Car Industry Suppliers at the Russian Market was organized within the frame of the visit at Ambassador Hotel. Violetta Komissarova, President of Chamber of Commerce and Industry, Stanislav Filippov, Deputy Minister for Economic Development and representatives of regional enterprises took part in the discussion from Kaluga Region. When presenting economic and investment potential of the region, Violetta Komissarova highlighted that the development of economy of Kaluga Region is based on cluster principle and the most important clusters – automotive, pharmaceutical and logistics successfully develop, among other, due to the efforts of German companies.

German business was represented by companies specialized in automotive, machine tool industry and metal processing: Braun Metall Vetriebs GmbH, Hermanns Gmbh, Thomas Gerd Eyring, and Maschinenbau Kern. Representatives of the companies named expansion of cooperation lines, establishing of new business links “aiming beneficial investments in the long run”, as purpose of their visit. Peter Schlosser reminded that this is not the first visit of representatives of Baden-Wurttemberg to Kaluga Region, “first one took place in 2012, and this was a successful experience, and we hope that this one will be also fruitful. We are ready for cooperation; it is important for us now to understand opportunities of work under sanctions and to understand expectations of Russian partners”.

Negotiations between German and Russian companies took place in B2B format after the round table session. Visit of Grabtsevo Industrial Park is also scheduled in the program of the visit.

It should be reminded that stable trade, economic, investment and cultural cooperation exist over many years between Kaluga Region and Germany. Over the last years, this country is the leader among foreign states by the volume of investments in the economy of Kaluga Region. 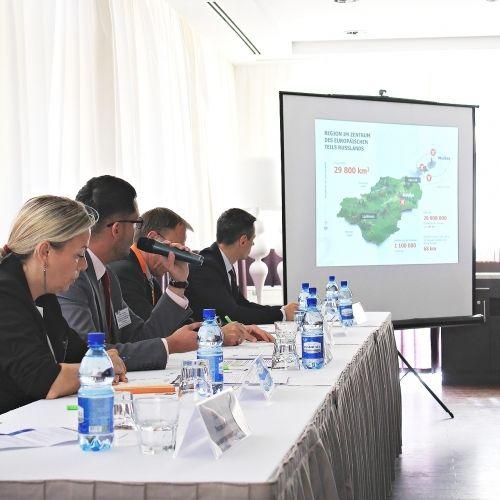