The farm in Uteshevo Village is designed to breed 6 - 8 thousand livestock; currently, 1,546 heads of Aberdeen-Angus cattle were moved to the site. The Company prepared 14,700 tons of haylage, harvested 1,812 ha of maize for silage, and accumulated almost 46,000 tons of green feed at the territory of Babyninsky District in order to provide them with feed. Spring sowing was performed at 4,661 ha.

Miratorg Production Base in Shlippovo, Sukhinichi District is a high-tech base for repairing and maintenance of motor vehicles, tractors and agricultural equipment. It is also designed to perform storage, transportation and logistics functions. It took four months to build it; expenses amounted to RUR 120 mln; 312 jobs were created.

The Governor visited administrative and amenity building equipped with modern computer and technical equipment and repair shop. The shop is divided into two areas; one for cars and trucks; there are posts for repairs of tractor equipment; there is also maintenance and tire fitting area, turning and fitting shops. Additionally, the complex has storage premises. There are sheds for equipment winter storage, own car wash, filling station, autonomous gas boiler-house and weight-checking stations.

In total, volume of Miratorg investments in agro-industrial sector of Kaluga Region amounts to more than RUR 7.8 bln. More than 600 jobs were created.  Land bank of the Holding consists of 120,000 ha, of which more than 53,000 ha are cultivated and another 64,000 ha are planned for cultivation in the near future. 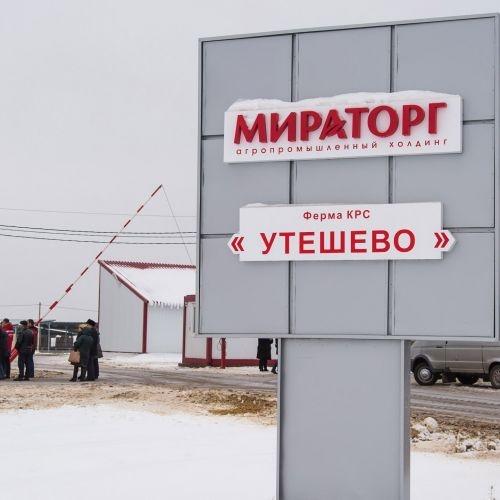