The Russia’s largest shrimp farm was opened in Kaluga Region

Anatoly Artamonov, Governor of the Region, Vasily Sokolov, Deputy Head of the Federal Agency for Fisheries, Robert Stubblebine, Director General of the Company.

Volume of funds invested in the project amounted to RUR 100 mln. The growing process is based on hi-tech technologies and almost fully automated. Special tanks for are installed at the farm for shrimp growing in conditions identical to the natural environment. An incubator for larvae is prepared, where up to 30,000 shrimps can grow.  Larvae for further growing are importers from the best breeders of Europe and the US.

The farm is now at its developing stage. 2 tons of shrimp have been grown since the beginning of 2017. Planned production volume is about 20 tons per year. There are also plans to increase significantly capacities and to reach the output of 30-35 tons of annual production. Additionally, Russkay Krevetka LLC has possibilities to increase production even more substantially (up to 100 tons per year), thus guarantying substitution of imported frozen shrimps. Own breeder for shrimp larvae will be opened in the future.

Robert Stubblebine, speaking at the opening ceremony, confirmed the readiness to expand business at the territory of our region. He also highly appreciated first results of the Company operations: “We achieved such scale of production and quality of products over one year that it is hardly achievable for our foreign colleagues over 15 years. This is what Kaluga specialists and our biologists and process engineers mean”.

Anatoly Artamonov noted that there are already several enterprises in the region, which operate in aqua-culture, including fish roe and midges of sturgeon. The Governor expressed hope that they will further develop. “Our task is to help them. We certainly provide extra land plots for them to expand production”, - the Governor said.

Vasily Sokolov positively assessed expansion of fish and sea products aqua-culture businesses in the central Russian regions and expressed hope that there will be even more such enterprises in the other regions of Russia. He wished success to the team the Russia’s largest shrimp farm. 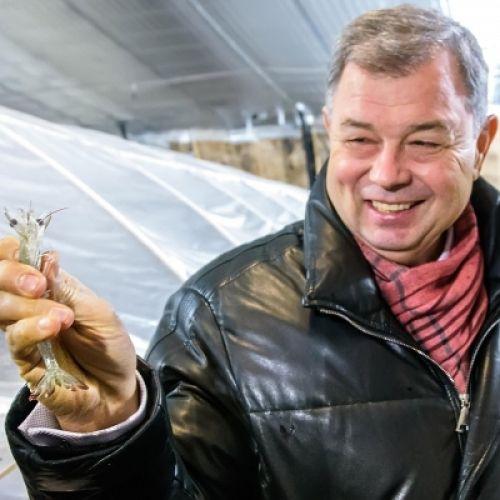