An agreement on intentions was concluded between Kaluga Region Government and Nestle Purina PetCare at Saint Petersburg International Economic Forum on June 2, 2017. The agreement provides for increasing production capacities of the company’s plant located in Vorsino industrial park.

The agreement was signed by Vladimir Popov, Deputy Governor of Kaluga Region, and Martial Rolland, CEO, Nestle, Russia/Eurasia. The ceremony was attended by  Alexey Gruzdev, Deputy Minister for Economic Development of the Russian Federation, Vladimir Potyomkin,  the Head of Kaluga Region Government Representative Office under the Government of the Russian Federation – Deputy Governor of Kaluga Region, Livia Leu Delegate of the Federal Council for Trade Agreements and Head of the Bilateral Economic Relations Division at the State Secretariat for Economic Affairs and corporate management.

The construction of the new pet food production facility  is to be commenced in 2017. It is to be commissioned in 2019. The scope of investments equals RUR 10 billon.  Nestle Purina PetCare  has already invested over RUR 12 billion in construction of its production facilities and a distribution center in Kaluga Region. Currently the plant employs over 850 people. Most of them are Kaluga Region residents.  About 80% of all raw and packaging materials used by the plant are manufactured in Kaluga Region. They meet stringent quality standards of Nestle.

Commenting on the event Alexey Gruzdev said: “The agreement signing proves the fact that business despite all difficulties feels itself securely in Russia”.

Vladimir Potyomkin spoke in a favorable way about Nestle activities in Kaluga Region. He said: “ Nestle has been implementing various socially oriented projects in the region. This is a highly reputable company with a 150-year history. We are fond of our cooperation”.

According to Martial Rolland, Nestle Purina PetCare Vorsino project is one of the largest Nestle projects in Russia. He said: “The project demonstrates our intentions to continue our operations in Russia”. Alessandro Dzanelli, Regional Director, Russia, CIS, Turkey, Israel, Nestle Purina PetCare, noted  that the new project’s implementation “will not only guarantees stable business development in Russia, but will also make a significant contribution to local communities’ development through creation of new jobs and suppliers’ development.  And, naturally, it is to improve life quality of pets and their owners”. 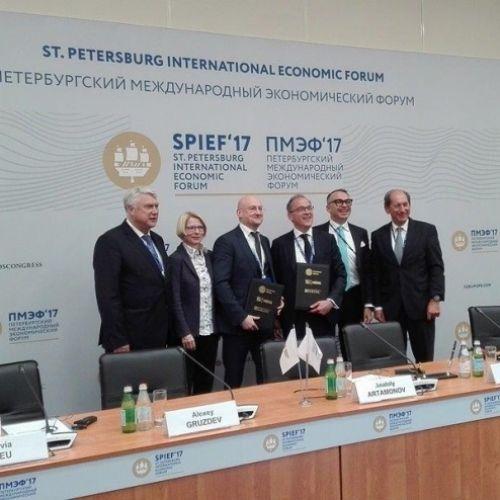