The official ceremony was attended by Deputy Governor of Kaluga Region Dmitry Denisov, Chairman of the Board of the Russian-German Chamber of Foreign Trade Matthias Schepp, Head of the Department of Economy and Science of the Embassy of Germany in Russia Thomas Graf, CEO of Continental Kaluga LLC Georgy Rotov and the company’s Vice President and Head of the Tires Division Nikolai Setzer.

The production line of the Continental plant in Kaluga has manufactured its 10,000,000 tire in under 5 years since the plant’s official opening.

The plant in Kaluga supplies a broad range of tires for passenger cars and light trucks that are distributed throughout Russia, in countries of the Asia and Pacific Region, Europe, Middle East and Africa. The plant is renown in the global Continental manufacturing network for outstanding quality standards, which were recognized with the internal Quality Award for 2017. From 2013, the plant’s team grew to over 1,000 employees.

“The tire plant in Kaluga was created “from scratch” but managed to grow into an independent enterprise and a success story. It is an important part of our Vision 2025 – the strategy of the Tire Division, which focuses on growth, value creation and excellence. With excelling at exactly these three values, the team in Kaluga has consistently progressed and successfully achieved all goals. In 2011 we laid the foundation of the tire plant, in 2013 we started production, in 2014 we celebrated the 1st million tires and today we have already reached ten million. It is a pleasure to see that in less than 5 years of the plant’s activity it has achieved such excellent results. Together, we managed to maintain the growth pace of this plant in a complex and dynamic market and to keep our promise to customers by constantly delivering excellent products”, says Nikolai Setzer, member of the Executive Board of Continental and Head of the Tire Division.

Matthias Schepp: “Germany continues to lead in direct foreign investments into Russia. There are dozens of German projects being implemented in Kaluga Region. I am confident that German companies operating in Russia will maintain their status of localization champions”.

Thomas Graf: “10 million tires is not just an output figure. It is the result of strategic development decisions and teamwork”.

The quality of the tires produced in Kaluga is proven by evaluations made by independent experts and customers. Continental tire plant in Kaluga confirmed its compliance with the German Processes Quality Standard VDA 6.3 and received the highest grade “A” rating from Volkswagen based on audit results. This proves that all production stages and all systems involved in manufacturing meet international demands.

Such high results are due to professionalism of the company’s employees. At present, there are more than 1,000 specialists working at the Kaluga Continental plant. Some of them have achieved great career peaks and are now sharing their experience with freshly hired staff members at new projects in Thailand and North America.

“We try to recruit candidates aiming for the ‘best fit’ for each position. We provide our personnel with opportunities for career development, professional and personal growth. Our employees undergo onsite trainings and regularly visit other Continental plants around the world within the scope of our international projects or simply to share experience”, says Georgy Rotov.

Apart from the quality of its products, the company assigns a lot of attention to maintaining ecologically friendly processes. Approximately 95% of production waste is suitable for processing and goes through recycling. In 2016, Continental Russia started developing a system for collection and recycling of exhausted car tires throughout the country, and in 2017 became co-founder of the EcoTireUnion. The company’s efforts in the sphere of environmental protection received high recognition during recertification audit where it received approval according to the new ISO 14001:2015 standard system of ecological management.

The Tire Division has 24 production facilities and develops branches throughout the world. A wide range of products and continuous investments in research and development greatly contribute to the company’s economically and ecologically efficient mobility. The company is a global leader in tire manufacturing with over 50,000 employees. In 2016, the Tire Division achieved a turnover of 10.7 billion euro.

Continental has three production facilities in Kaluga. The Continental Kaluga LLC tire plant was the first Continental plant in Russia that was officially launched in October 2013.

In the first half of 2014 the company commissioned two more plants: Continental Automotive Systems RUS LLC for manufacturing of automotive components and fuel supply and injection system elements, and ContiTech to manufacture pipelines for automotive air conditioning and power steering systems. 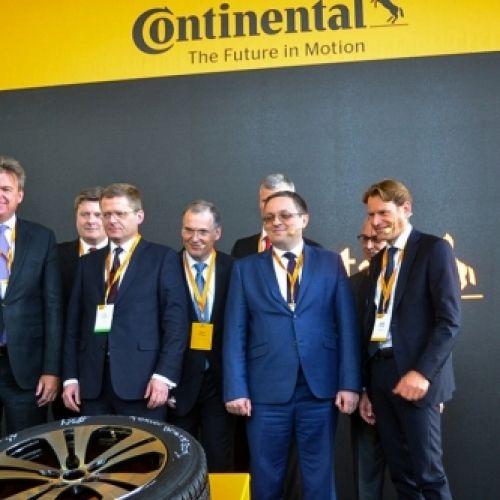