On October 31, Kaluga Region Investor Club business evening dedicated to the Kaluga Region achievements, perspectives and trends of the investment policy was held in Tarusa. This is the 12th meeting since the foundation of the Club.

Acting Governor of the Kaluga Region Vladislav Shapsha visited the meeting of Kaluga Investor Club. Guests and members of the Club are managers of companies implementing their projects within the Kaluga Region, as well as potential investors who are at the stage of making a decision to become investors. Anatoly Artamonov, Chairman of the Federation Council Committee on Budget and Financial Markets, Antti Helanterya, Ambassador Extraordinary and Plenipotentiary of Finland to the Russian Federation, and Johan Vanderplaetse, Chairman of the Board of the Association of European Businesses also took part in the Club’s meeting.

Head of the Region noted that despite all the difficulties of this year, the investment activity of the Kaluga Region has not been reduced: "In the first half of 2020, the volume of investments increased by 18%, 19 new investment agreements were signed for the amount of RUB 29.5 bln, as well as new enterprises are being built. Herewith, the Government of Russia approved the application from the Kaluga Region to create a territory of advanced development located in Kondrovo."

Vladislav Shapsha expressed his gratitude to the partners for their trust: "Attracting private capital has been and remains one of the main tools for the development of the region. Our Russian and foreign partners will be provided with stable business conditions" stressed the Governor.

During his speech Anatoly Artamonov expressed confidence that the existing management team of the region represented by Vladislav Shapsha, will continue the course of successful cooperation of the region with Russian and foreign investors. He also noted the support provide by the Federal authorities to local entrepreneurs. In particular, the Senator stressed that the federal budget for the upcoming three-year period includes an additional resources of RUB 30 bln to provide annual compensation to regions for lost income from the application of the investment tax deduction. This is a new support measure introduced at the initiative of Russian President Vladimir Putin.

Vladimir Shapsha, Antti Helanterya, Ambassador Extraordinary and Plenipotentiary of Finland to the Russian Federation and Johan Vanderplaets, Chairman of the Board of the Association of European Businesses held several business meetings. During them the following issues were discussed: the current condition of the economy and the impact of the spring restrictions related to the pandemic. It was noted that the Kaluga Region remains one of the most dynamic and favorable regions in terms of attracting Russian and foreign investments.

During the event, Markus Ozegovich, General Director of Volkswagen Rus LLC, was awarded the Governor's Badge of Honor "For Personal Contribution to the Kaluga Region Development". Also, the letters of gratitude signed by the Governor of the Kaluga Region for the assistance provided during the declared isolation regime in order to prevent the spread of coronavirus infection (COVID-19) were given to the representatives of Kaluga companies that contributed to the fight against the pandemic. 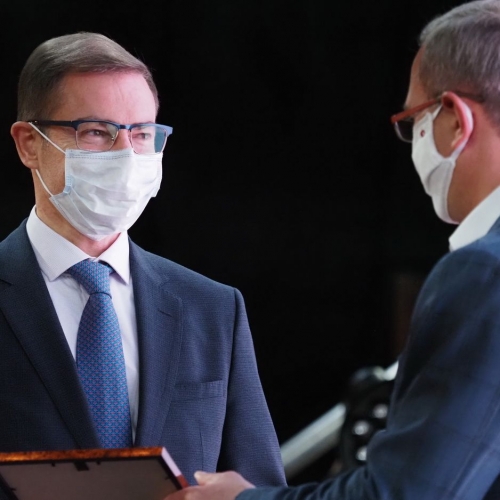