On December 3, a Kaizen Educational Workshop for businesses of Kaluga Region was held in Kaluga at Four Points by Sheraton Kaluga. Experience accumulated by Japanese companies in enhancing labor productivity and active corporate activities was presented by renowned kaizen specialists from Japan. The workshop was organized within the framework pf state-level programs between Russia and Japan in 2017-2018 – Diagnostics of Productivity at Russian Enterprises and Personnel Formation in Related Sectors.

Katsuhiko Suzuki, Vice-President of Toyota Engineering Company, was the lead speaker at the workshop. He is considered founding father of world-famous Toyota Production System (TPS). Japanese experts, who performed diagnostics of productivity at Russian enterprises in 2017-2018, and accumulated valuable experience in understanding main issues and objectives of Russian production companies, were also among workshop participants. Japanese ROTOBO Association was organizer of the workshop; it held it in cooperation with the Government of Kaluga Region and with support of the Chamber of Commerce and Industry.

Anatoly Artamonov, Governor of Kaluga Region, personally supported the idea to hold a kaizen workshop: “ROTOBO does very important job in Russia. Today, businesses in all regions are oriented at mastering global advanced experience. Japanese business, which literally revived the country from ruins, made Japan one of the most developed economies worldwide, and is worth to be followed. The experience of Japanese companies is very much sought after; many enterprises in the region are seriously aspiring to increase their labor productivity. For example, NLMK Kaluga Plant, the major manufacturer of rolled steel in the Central Federal District, was recognized this year as a leader by its labor productivity in metal works. We value very high the will of our Japanese partners to act in a concerted effort. This can be a good example during Russia-Japan bilateral year of cooperation”.

In November, we visited Perm Territory; there are arrangements with Bashkortostan, Krasnoyarsk Territory. Kaluga Region is a leading region in attracting investments; this is why we are very much interested in cooperation with your companies. They may represent various sectors – electronics, machine-building, metal works, agriculture, wood works etc. Our purpose in this case is to diversify industrial structure and to increase labor productivity. We develop recommendations subject to existing production base of enterprise.

We discovered many new interesting enterprises; we opened new opportunities for cooperation by organizing kaizen workshops. We use the slogan ‘Made in Russia with Japan’, and we try to integrate efforts of Russian and Japanese enterprises. From this perspective, it would be very interesting for us to make a joint project with Kaluga Region. We don’t want to only teach. We also want to understand you, to learn from you, familiarize with your potential and to develop together”.

During the workshop, Katsuhiko Suzuki, Vice-President of Toyota Engineering Company, shared its experience in enhancing labor productivity and activating corporate activities with representatives of Kaluga businesses. The expert highlighted that the success of implementing kaizen system in the region depends on availability of enterprises having major potential for improving labor productivity. Yo Koji, Director of World Business Associates Company made a report “Kaizen – qualitative analysis through collection of objective data”.

ROTOBO Association, operator of the program, organized in 2017-2018 visits to more than 20 enterprises in various Russian regions by Japanese kaizen experts (continuous improvement of production).

In their turn, Russian enterprises actively study Japanese experience in increasing productivity: representatives of 40 regional companies participated in familiarization internships in Japan during the recent one and half year. They visited ‘gemba’ (production sites) of the market leading companies; they took part in practical workshops.

More than 50 Japanese companies, leaders in their industries, became partners of the program for diagnostics and internships for Russian specialists: Toyota Motors, Kawasaki Robocenter, Yasukawa Electric, Hitachi Hi-Tech, Fujikura, Yamazaki Mazak and many others. 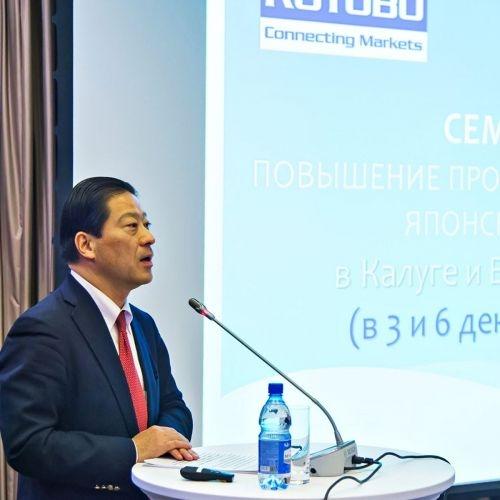