Volkswagen Group Rus Kaluga plant proved to be the most efficient Volkswagen plant in the world, getting Transformer of the Year award for achievements attained in 2017. The success criterion was the plant’s performance under Volkswagen production strategy.

TRANSFORM.FACTORY+ strategy is aimed at improvement of production and logistic processed, productivity increase and promotion of company’s products’ competitive ability. All company plants were assessed in terms of their efficiency and the degree of TRANSFORM.FACTORY+ strategy’s implementation success. TRANSFORM.FACTORY+ strategy is to promote integrated improvement of production processes by 11 parameters, including productivity, quality, team efficiency, environmental performance, etc. Volkswagen Group Rus Kaluga plant managed to win the award thanks to achieving impressive success in terms of labor productivity increase, production and logistic costs' optimization,  environmental impact decrease, optimal use of investments.

The time required for production of a car was reduced by 17% thanks to production processes’ optimization. Apart from that the plant managed to significantly improve its target quantity parameters in terms of waste dumping costs’ reduction per one manufactured car, and to optimize the use of utilities, which had a positive impact on Think Blue Factory environmental strategy in 2017.

Transformer of the Year Cup is awarded within the framework of   TRANSFORM.FACTORY+ production strategy, which is a part of long-term TRANSFORM 2025+ strategy providing for global changes in Volkswagen and setting plans for the next decade and a later period. The central focus of the strategy is to improve Volkswagen positions in all markets and segments as well as to significantly improve efficiency and productivity. 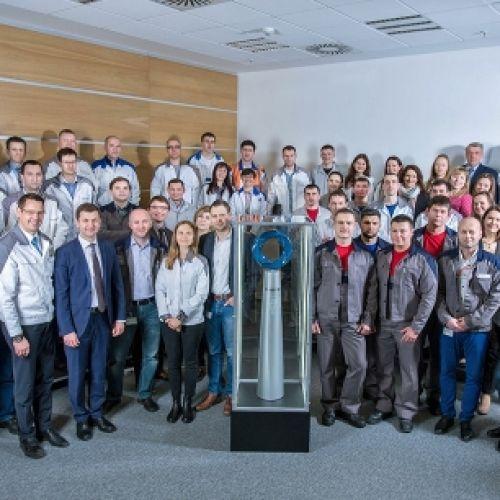